The first paid fire department in the City of Montreal was formed in 1863. Over the years, as the city annexed suburbs, their municipal fire departments were merged into the Montreal Fire Department.

In 2002, the remaining 27 municipalities on the Island of Montréal amalgamated to form the new Ville de Montréal. This resulted in the merger of 24 fire departments into the new Service de Sécurité Incendie de Montréal (SIM). In 2006, many of these cities regained their municipal independence but fire protection services remained amalgamated.

In addition to the original Ville de Montréal, the following fire departments were part of the merger. They are grouped into their districts in roughly east to west order:

Numbers in (parentheses) are shop numbers. 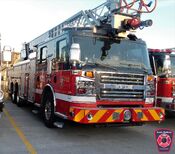 Unité 226 is currently at Caserne 45 while the station is being rebuilt.

Spare unit 292 and Station 2. Pumpers are kept outside, the fire station is at the right.

Spare rigs and units requiring long-term repair are stored at the Municipal Garage. 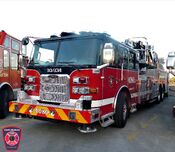 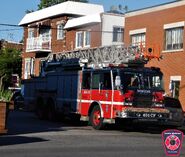 The district headquarters usually had the 400P and an 800 that was a Dodge van (used to deliver paycheques, among other things).