Pierre Thibault refers to a fire apparatus manufacturer located in Pierreville, Québec, Canada. The company operated under various legal names from 1928 to 1992. Pierre Thibault (ca.1898-1961) was also the founder of the company.

Pierre Thibault became involved in the fire truck industry in the years after the First World War as part of his father's business. Charles Thibault (1873-1958) made hand pumps in Sorel, Québec and built horse-drawn fire apparatus for small Québec communities. In 1932, Pierre formed Camions Pierre Thibault and moved manufacturing operations to Pierreville in 1938. The company built several crash trucks for the Canadian government during the Second World War and expanded its sales to municipal fire departments across Canada soon after. Pierre Thibault added custom chassis and aerial ladders to the company lineup during the 1950s.

Thibault logo in the 50's 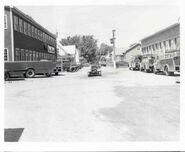 When Pierre died in 1961, the company passed to his nine sons. The company continued to do well. However, by 1968, some of the sons wanted to leave the fire truck business, while others wanted to remain involved. Brothers René, Julien, Marion, Charles-Étienne and Yvon started Pierreville Fire Trucks in nearby Saint-François-du-Lac and the original company was sold to interests outside the family. In 1972, it went bankrupt, was sold and reformed as Pierre Thibault Canada (1972) Ltee.

The round plate logo

In 1979, the company again fell on hard times and went bankrupt. Pierreville Fire Trucks had flourished and the brothers operating Pierreville decided to purchase the assets and order book of the old family firm. Brother René Thibault (1920-1982) was sent to negotiate and plan for the merger. However, René actually purchased the company for himself, leading to considerable discord among the family. René renamed the company Camions Pierre Thibault Inc.

Pierre Thibault continued to manufacture trucks and aerial devices after René's death in 1982 and Pierreville's bankruptcy in 1985. However, the company went bankrupt for a final time in 1990. Outside investors purchased the assets of the company and operated it as NovaQUINTECH Corporation. NovaQUINTECH received investment from Québec conglomerate Bombardier in 1994. In 1995, NovaQUINTECH stopped building pumpers, concentrating solely on aerial devices. In 1997, it sold its line of aerial products (the SkyArm, SkyFour and SkyFive line of aerial devices) to Pierce Manufacturing.

Companies owned by members of the Thibault family[]

Thibault built all types of apparatus on commercial, custom and Thibault-built apparatus. Trucks were sold across Canada and throughout the United States (particularly in the Northeast). In addition, apparatus was sold to fire departments in Jamaica, Columbia and Chile, as well as a few to the Middle East.

Community content is available under CC-BY-SA unless otherwise noted.