The City of Vanier and Village of Rockcliffe Park were also part of the amalgamation, but both of these municipalities already purchased fire protection from the City of Ottawa. The Vanier Fire Department was disbanded in 1985 when the city contracted with Ottawa.

The Ottawa fire Service (OFS) is staffed with career and paid-on-call personnel, with a total of 1576 firefighters. OFS has one (1) Fire Chief, serving under him are three (3) Deputy Chiefs, four (4) Platoon Chiefs, four (4) Rural Sector Chiefs, five (5) Division Chiefs and Twenty (20) District Chiefs. Districts 1-5 are all full-time with the exception of Pump/Tank 41, Squad 41, Tank 45, Squad 45, Pump/Tank 46, Service Vehicle 46, Pump/Tank 53, and Squad 53. Those eight (8) trucks are volunteer trucks. Districts 6-9 are staffed by volunteer firefighters.

There are 45 Fire Stations in Ottawa, 16 volunteer and 29 full-time. The urban firefighters work rotating 24-hour shifts while the volunteer firefighters are on-call at all times.

Currently, City of Ottawa firefighters are being issued tan Starfield Lion bunker gear, black leather STC Marshall fire boots, and traditional black Cairns 1044's. OFS use's MSA FireHawk M7XT SCBA's. Black helmets with two (2) orange stripes means a rookie firefighter. A black helmet with no stripes means a senior firefighter. A red helmet can belong to a Lieutenant or Captain. A white helmet belongs to a Chief. All volunteer firefighters and all chiefs are issued Swissphone DE925 pagers or Daviscomms Br802 pagers. As of 01 Oct. 2012 the program and smartphone app I Am Responding (when a call is dispatched, this will show how many firefighters are responding to the station) was used in every rural station in Ottawa. As of 2020, it was discontinued in favour of Who's Responding.

After amalgamation, the OFS ordered 20 new HME pumpers, trying to make a uniform department. To replace the aging HME pumpers, OFS ordered 24 KME pumpers to keep a uniform department. Along with the amalgamation, OFS inherited all pre-amalgamation fire trucks. Apparatus are identified by a letter to identify the vehicle type, followed by a number that identifies the station it is housed in, for example; P12 stands for a Pumper housed at Station 12. District and Rural Sector Chiefs are identified with a C (standing for car) then the district number they are in, (example, C10 means a District Chief in District 1) Types of apparatus in service include:

Shop numbers are in brackets adajacent to the unit designation. Shop numbers consist of a four-digit numerical (XXXX) or five-digit year-numerical (YYXXX) assignment with a two-digit prefix. The prefix identifies the type of apparatus.

As of June 2021, the OFS frontline fleet consists of: 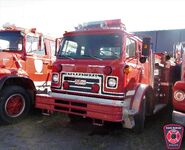 A June 2015 study recommended the relocation of Station 45 further south to better serve the area of South March, with construction planned for 2020, costing about $5.5 million.